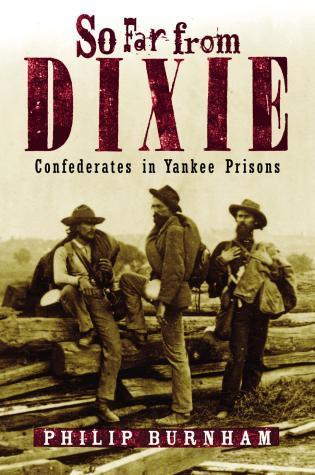 "Many have seen the posed photographs of Union prisoners who had come back from the 1860s Georgia hellhole known as Andersonville: the hollow eyes, the wan visage, the slack posture and protruding bones, the image of standing corpses who paused to have a studio portrait taken somewhere on the their way to an elderly grave.  They are among the most shocking images of the American Civil War, presaging as they do the grisly documentary footage filmed when the Nazi camps were liberated in Europe eighty years later.

"We do not see any such photos of the men who fought for the Confederacy and returned home from northern prisons.  Nor do we ever hear their stories.  This omission is hardly due to a lack of published narratives, scores of which are scattered in archives and libraries across the country.  The silence can hardly be passed off as a mere footnote to history, since Confederate prisoners (over 200,00) were generally agreed to have outnumbered their Yankee brethren during the war.   Of these, some 26,000 Rebels died in captivity, more than all U.S. battle deaths recorded in the Revolutionary War, the War of 1812, the Mexican War, and the Spanish-American War combined."

Civil War News: "Those searching for a probing story about life in Civil War prisons will not be disappointed with Philip Burnham's So Far from Dixie."

Civil War Times: "So Far from Dixie is an outstanding narrative of prison life."